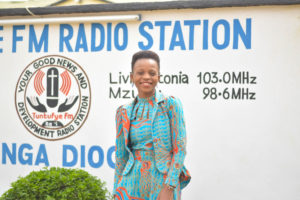 She was born in Rumphi District in 1993. She has six year experience as a radio presenter and producer having joined the industry in 2013 as a trainee at Tigabane Catholic Radio Station in Mzuzu Diocese. After her one year training, she worked as a producer and presenter at Radio Tigabane. In 2015, she joined Mzimba Community Radio where she rose to the position of Head of Programmes three months later. She then moved to Tuntufye FM Radio Station in Karonga Diocese. She joined Tuntufye FM Radio Station as a Producer and Presenter. She was later chosen Acting Head of Marketing and later assistant to the Head of Marketing, a position she is holding now.